GRO was happy to be part of Papercut Press’ Nerd Grrrl Series features women from the world of skateboarding. 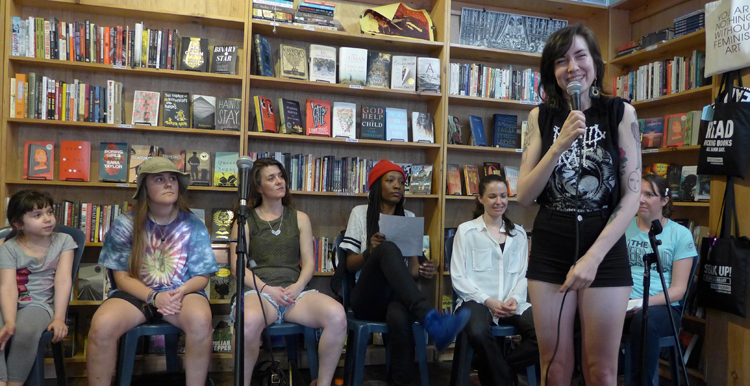 The panel brings together women of diverse ages and backgrounds to talk about what it’s like to be a woman skateboarder.

The panelist included…
Courtney Payne Taylor was born in Bloomington, Indiana and lived there through her graduation from Indiana University. She began skating at 22 years old when the city opened its first skatepark. Skateboarding was so significant, positive and fun that it “saved her life.” When Courtney noticed a lack of female participants in skateboarding, she began teaching girls in Bloomington to skate and in 2006 launched Girls Riders Organization, Inc (GRO). For almost 6 years she lived out of her van, conducting an average of 100 skateboard workshops for girls in over 40 states each year. GRO has continued to evolve to today with a focus on empowering many to action instead of relying on the action of one person. That transition led to NYC and where GRO is today. Courtney has worked with the X Games, Dew Tour, major industry summits and currently the Olympics.

Nathalie Herring aka NAT2LEGIT has been “Street Surfing on Concrete Waves” in NYC for the past decade. She is one of the first recognized female longboarders on the scene representing Bustin Boards Boarding Company. She’s been featured in Concrete Wave Magazine numerous times, TRACE Magazine, Thrasher & many more publications and various commercials (New Era, APPLE, GOOGLE) because of her accomplishment in skateboarding, that cool sense of fashion style & positive outlook on life through the years. Jay-Z’s lifestyle website LIFE + TIMES featured her, along with her talented “sisters in skate” Jenica Davenport and Micku Murgolo, in a mini documentary called “Concrete-Gold” (www.lifeandtimes.com/concrete-gold) early in their careers and raised awareness about female empowerment and the unique style of longboarding in NYC through their personal experiences. This opportunity was seen around the world and solidified NAT2LEGIT’s presence in the longboarding scene of NYC and inspired young women to be themselves & Go SKATE!
Throughout the years, longboarding has been an integral part of her lifestyle. Now a NYC-based DJ (Hudson Terrace, Gallery Bar, Dempseys ¦) & officially the CEO of her own corporation, NAT2LEGIT INC., she’s set to launch “The N2L Project”, a collective of initiatives geared towards individuality and simply “not compromising who you are, to [be] who [you] are” and all thats left to say is Stay Tuned!! Cause’ she is definitely one woman that is literally…2Legit2Quitwink emoticon

Nina Moran grew up in Brooklyn, NY. She’s been skating for 4 years and is 17 years old.

Chloe Stark is a six-year-old skater who, at two years old was fitted with bilateral cochlear implants to combat imminent hearing loss. On her skateboard, Chloe is just one of the girls, practicing drop-ins and eager to learn new tricks. Her determination has won the hearts of many, including the HearStrong Foundation, who honored her as a Champion last June and the Girls Riders Organization (the group she is training with). Efforts are under way with adaptive sports companies to design a helmet that will accommodate Chloe’s cochlear implants safely and make it less “uncomfy” for her.