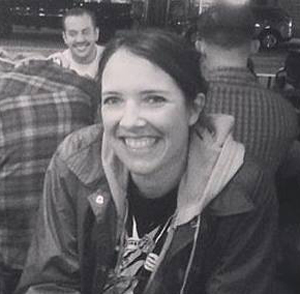 How long have you been skating?
I got back into skateboarding a few years ago. I used to pass a shop called North Brooklyn Collective that was next to my food coop. I was unhappy with my life at the time and every time I passed the shop, I wished I could get back into it, but I thought I was too old. One day I realized I had nothing to lose so I walked in, bought a board and had it set up. The guy who sold it to me was really encouraging saying “You’ll get it” and “If you need some pointers getting back into it, let me know.” I started skating by myself on the side streets, between my co-op and the gym. I figured that pushing would come back to me like riding a bike. I learned how to skate a little bit when I was in middle school and again when I spent a college semester in Philly, in 2002. A friend came to visit and I didn’t have a bike to get around the city. He had two boards with him and he left me one. For the amount of potholes there are in Philly, it was surprisingly easy to skate the streets in center city. I had no idea what I was doing but I just started skating everywhere I went. 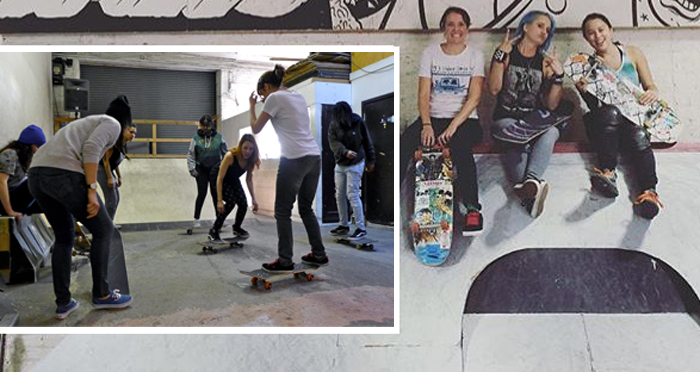 How did you find GRO?
I never had a lot of experience, so it wasn’t easy getting back into skateboarding. I would fall and most people were like, ‘oh my god, be careful, you’re gonna hurt yourself.’ I met a guy in the NY Skateboarding scene and told him I was trying to get back into it. I remember being like, ‘Let’s skate over the Williamsburg Bridge’ and he was like, “Are you ready for that?” I was not, but I thought, how else am I gonna learn? He said, “You should meet my friend Courtney and check out GRO. You would love it.” I looked it up, got stoked from the website and joined. I was so excited to go to sessions, make media of girls in skateboarding and build community. The first GRO session I went to was the first time I skated something other than flat ground. I tried to skate a bunch of stuff that I was not ready for. I fell and broke my wrist. Courtney was out of town at an event in California. We had never met but she emailed me the following week saying that she heard I took a slam and had a good attitude about it. I’ll never forget, she said “Strength is beautiful” and GRO was there for me if I needed anything. I’ve been hooked ever since. For the last year, I was the President of the GRO NYC crew. This year I’ve taken a new role as Director of Operations for GRO nationally. I’m excited to start working with all the crews, providing resources for their aspirations and building a bigger network between us. I love GRO because it teaches girls of all ages and abilities to be confident in themselves. It creates a community where they encourage and teach each other and of course there’s lots of skateboarding. In NY, we have two monthly sessions at Homage, an indoor training facility in Brooklyn. We do the last Tuesday of the month from 7pm-9pm which draws more of our experienced rippers but is open to all levels. I’m still trying to get my ollie and haven’t learned to drop in yet but I look forward to getting them at our sessions this year. The second Sunday of the month, we do 10am-12pm and it is geared toward teaching more of the little girls, beginners and first time riders who want to check it out.

Where do you like to skate?
NYC streets, Homage, Skate Brooklyn, Riverside Park, Slappy Sundays at BOCA LES, the monument, over the Williamsburg Bridge, down Broadway through Manhattan, up and down the Hudson River.

Have you skated anywhere else?
I went to San Diego last November for Exposure (the largest women’s skateboarding competition). We skated at the YMCA, Alex Road and the Iguana Bowl. We got to skate with lots of little girls, teenage Pros and the super rad Mighty Mamas and Sisters of Shred which includes lots of women in their 40s and 50s. We tried to hit up the Washington Street park before we flew out but they weren’t open that day. It looked awesome through the fence and I look forward to going back there, especially the more I progress.