Dusters & Cindy Whitehead Support GRO with the Girl Is Not A 4 Letter Word Dusters complete skateboard.  Every board sold provides a portion of the sale as a donation to Girls Riders Organization, Inc.  This is not only a great board, but also supports a great cause! 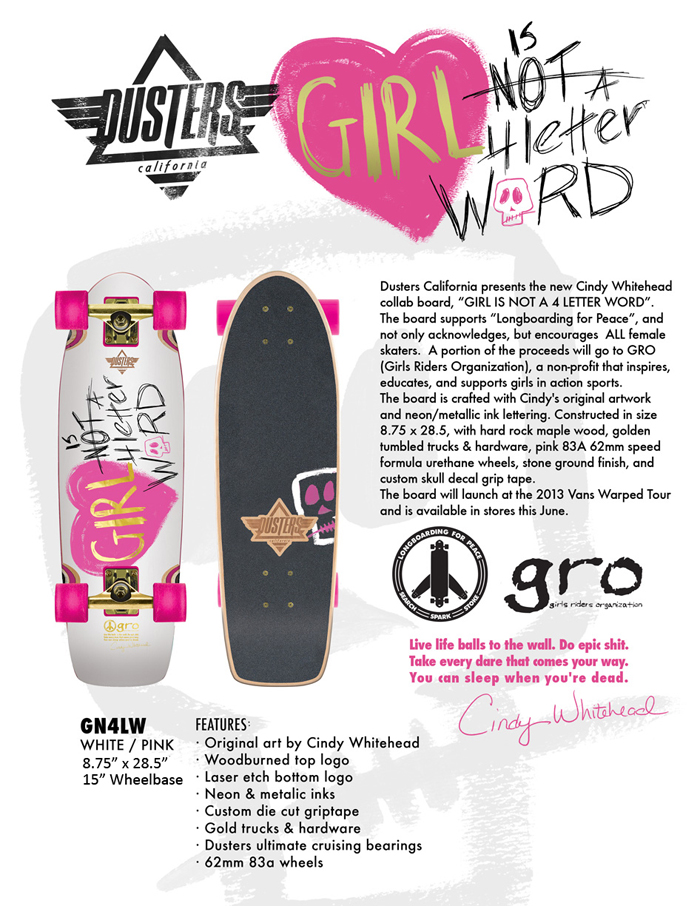 The girl behind “Girl is NOT a 4 Letter Word” is pro skateboarder & sports stylist® Cindy Whitehead. Southern California born and bred.

Cindy took the skateboarding world by storm in the late 1970’s with her brash style and technicality.

In the male-dominated, testosterone-fueled world of vertical skateboarding, Cindy stood out.  She began skateboarding in Hermosa Beach by riding freestyle at the pier. She quickly switched over to vertical and progressed rapidly, becoming a mainstay in the women’s vertical skateboarding scene. At sixteen years of age, Cindy became one of the top female professional vert skateboarders and was sponsored by Tracker Trucks, Sims Skateboards, Puma Tennis Shoes, Rector and Fly-a-Way Helmets.

She has the distinction of being one of the very few women ever featured in a skateboarding centerfold, and is the only female skateboarder to ever be sponsored by Puma.

Since then, Cindy has gone on to coin the term “Sports Stylist,” working as a fashion stylist with companies like Gatorade, Nike, the NBA, and athletes like Tiger Woods, Kobe Bryant and Mia Hamm.

Last year she made national headlines by skateboarding down the closed 405 freeway in Los Angeles and now she has her own skateboard collaboration “GIRL is NOT a 4 Letter Word” with the biggest company in skateboarding – Dwindle Inc. She’s chosen to use this collaboration to give back, by donating a portion of the proceeds to GRO ‘Girl Riders Organization.

The prototype made it’s first debut at the 2013 IASC Skateboarding Hall Of Fame.  The board’s shape reflects the boards from Sims Skateboards that Cindy rode during her professional career.  She designed all elements of this board to speak to her own style.  It is such an honor to have a true legend of skateboarding work with GRO in such an amazing way!

Cindy was recently asked to donate some of her equipment & clothing she wore as a professional skateboarder during the late 70’s and early 80’s as well as the the prototype of the “Girl is NOT a 4 letter Word” skateboard and it’s original artwork to the Smithsonian’s National Museum of American History’s sports collection on June 22, 2013.

Cindy has been profiled in magazines and sites such as, ESPN, The Huffington Post, & Women’s Wear Daily, and has apparered on numerous TV and radio shows. She most recently spoke about skateboarding x fashion in Washington, DC at The Smithsonian Museum’s Innoskate event. 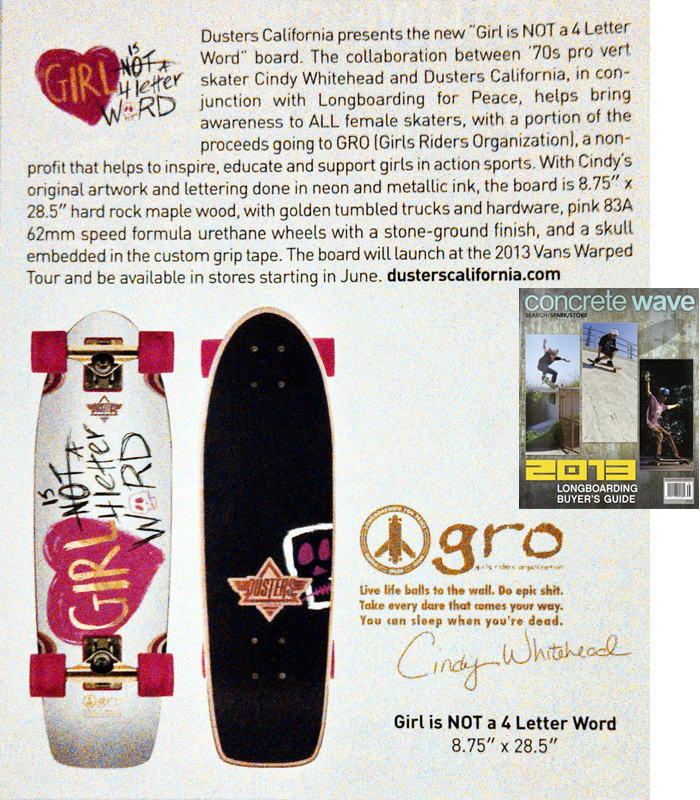 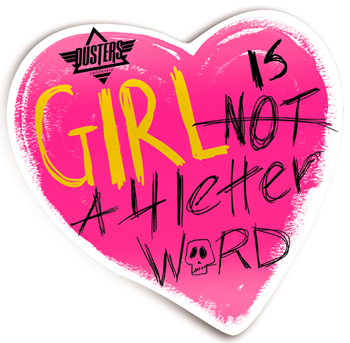 Get your own GN4LW board before they are gone!

Check out Pink Widow Distribution or other Duster’s California shops to check availability.

See The Girl is NOT a 4 Letter Word: Cindy Whitehead – TEDxYouth Video on youtube.

To learn more about Cindy Whitehead and this product visit girlisnota4letterword.com